ME Warrior Of The Week: Brittany, Living With M.E. Since She Was 18 Years Old

I'm Brittany. I have suffered with ME since September 2013. It started 2 weeks before my 19th birthday. I was a University student studying psychology and linguistics, working a part time job at a restaurant and had a booming social life.

One morning I woke up and felt that something was very wrong, I blamed it on exhaustion and not taking care of myself... I thought it would go away in a day or two, 6 years later it’s still here.

How It All Started

I could not walk up a flight of stairs without being completely exhausted and my heart racing so fast I would have a panic attack. I had to quit my studies, I could no longer walk from class to class or sit and listen to a lecture because I felt like I was going to faint, was flushed and my head was spinning. I had vertigo so bad that the screen in front of me would focus in and out.

This was definitely not from lack of sleep, this was not the flu, this was serious... I thought I was dying.

I called in sick for work that weekend but could never return. I was bed-bound for months just trying to make it through the day wondering what was wrong with me. None of my friends visited me for months, even years later. I was in pure survival mode. I was put through every test, saw countless doctors and specialists and none were able to give me answers.

I heard I should be happy my tests were normal, I have anxiety and that’s manageable, I can go back to work/ school because nothing was wrong with me, in fact none of the multiple seriously disabling symptoms I had were even a big deal...but I still felt like I was dying.

​A Diagnosis At Last

Finally I saw an internist that diagnosed me with ME and told me that I could be better within a few years or maybe never at all. That was it, no treatment. It gave me an answer to one question but left me questioning everything else about my life.

​He said that some people have to change their career and way of life to accommodate their new one.

I thought that would never happen to me, I would be better in a year or so and then get right back on track. Boy, was I in denial.

Somedays I feel completely defeated and hopeless that I will even get my health back, somedays I have hope and faith that I will be able to fulfill my hopes and dreams and get my life back.

I like to think that I have more of those days than the bad ones. I’ve learned to take life hour by hour, minute by minute, breath by breath.

I am an ME warrior. 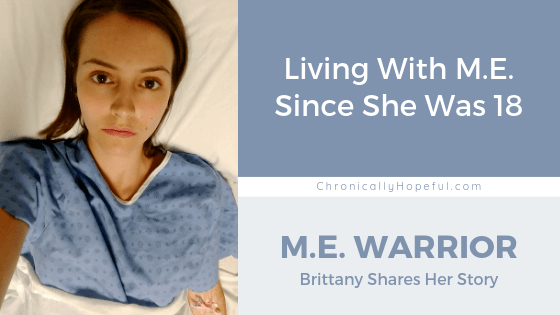