How The Ketogenic Diet Reduced My ME/CFS Symptoms 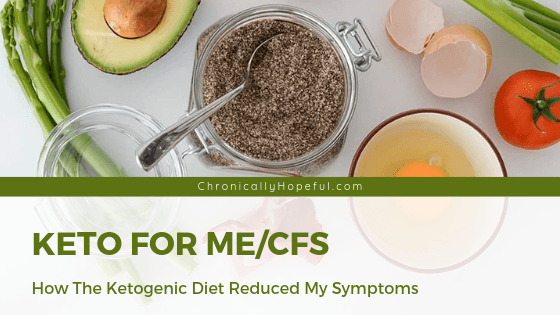 If you've been following my journey for a while, you'll be aware that I use Keto for ME/cfs management. I often get asked what this ketogenic diet has done for me. What benefits have I had? Why should somebody give up those delicious carbs and starchy foods? Are the benefits really worth the sacrifice? Should you try Keto for ME/cfs too?

In this post I'll explain my journey so far. In short, in my opinion, the answer is yes - it's definitely worth a shot! Let me tell you why...

At the beginning of February 2017 I started my transition to the ketogenic way of life. It happened​ after reading just a part of Dr Sarah Myhilll's latest book 'Diagnosis and Treatment of Chronic Fatigue Syndrome and Myalgic Encephalitis'. Dr Myhill specialises in treating patients with ME/CFS and is well loved and trusted among the ​patient community.

I decided to take a leap of faith, not really knowing the scientific ins and outs of this way of life, but trusting that she knew what she was talking about. The best part is that Dr M doesn't ask you to do anything she doesn't do herself. So to trust a doctor with years of experience studying and treating patients with this chronic illness, who also puts into practice what she preaches, wasn't really that much of a leap!

I have since also bought her latest book 'The PK Cookbook: go paleo-keto and get the best of both worlds'. You can read my thoughts on this book here.

How Did I Transition?

My transition to Keto was probably not the most commonly chosen route. ​Most people choose to slowly lower their carb intake before going fully ketogenic, but I jumped into this new, very low carb, high fat way of life immediately. From a non-keto breakfast my mum went straight into keto for lunch and we didn't look back (my family cooks for me as I'm not strong enough to cook yet).

Why I Took A Break From Keto

I stuck with it for 2 months before I decided to stop due to an allergic reaction to an unknown allergen. When I switched to keto I started eating things I didn't usually eat, so it was bound to be something I had eaten causing the terrible itching all over my body - or so I thought.

Turns out my body probably has trouble eliminating histamine and some foods contain higher histamine levels than others. I simply had to modify my personal food list and was prescribed antihistamines to help eliminate the crazy itching.

I took 3 weeks off the Ketogenic diet to figure things out and plan what my shopping list and meal plans would look like on a low histamine diet and then hopped back into Keto in May. During those three weeks, I went back to eating the average high carb diet most people eat and boy did I pay for it!

Side-effects Of A High Carb Diet

My eczema came back within days, as did my joint pains and over the weeks my general pain increased to horrible levels. I had to start taking Naproxen again after being medication free for months. Apart from the pain, I also felt generally weaker and less energetic. Less clarity of mind with an increase in the dreaded brain fog.

My heart palpitations returned and so did the insatiable munchies! When I eat carbs, my body just doesn't register when I'm full and I keep feeling hungry. This is probably how I managed to eat so much all my life and become so overweight.

It seems it was simply a chemical reaction that made my body malfunction and think it was always hungry. I'm sure there is actually a scientific explanation and name for it, but that's the basics of what was happening. To my body, carbs are like kryptonite.

Some History About My Condition

My ME/CFS is quite severe, I've been housebound and mostly bedridden since April 2015. I had had short periods of improvement in the first year and again in the beginning of 2016, but they only ever lasted a few days to a week or maybe two. Then the decline would come again and I'd spend weeks or months in bed.

The steady decline started around June 2016 after a lovely period of improvement and a few outings. It reached the point where I was only able to shower, seated, once a week and I'd pay for those showers for days. My sister had become my full time carer, taking care of house and food and me whenever I crashed so low that I couldn't even pull up my trousers or move my own limbs in bed. It was scary at times.

2017 has been spent mostly in my bed. I'd stopped doing art and crochet, I read less, I did less. Most of my time was spent reclined or lying down in my bed watching Netflix or scrolling through images on Instagram. Living through the camera lenses of other people. Recovering from my last shower or visitor or simply digesting my last meal... everything was just exhausting.

Moving To A New Home

As the months passed the excitement and fear grew as we were planning to move to a new home. I am always excited to move to a new house, I've always loved that, but this time would be very different. This time I was ill and would not be able to face even the presence of other people packing my things - I certainly was not able to pack them myself!

My amazing parents volunteered to do all the packing and cleaning and managed to secure the new house for us, in advance, so that I could escape the commotion in my old flat and my sister travelled with me to the new home.

During my last week at the old flat I had visitors, I had a shower (anticipating huge payback from a full day of travel and not knowing when I might be fit enough to wash again), and then the taxi and train journey to the new place. So much exertion for somebody who had been bedridden for months!

The amazing thing is that the expected flare never came! It took an entire day of travelling to get to the new area. On top of all the other activity I'd had that week, I expected some sort of payback, at the very least a few days in bed, completely out of it physically and in a lot of pain, but none of that happened!

I had been out of my house just a week earlier for a doctor's appointment, and that was only 20 minutes away - that gave me terrible payback just like every other outing before, but not this time. The only difference was that this time my body was not only in ketosis, but it had finally fat adapted.

My Ketogenic Diet, Round 2

I had already restarted the ketogenic diet about 2 weeks before the move, at the start of May. Within 3 days my eczema was almost gone and my joint pains vanished soon after that. As the weeks passed, all the keto benefits reappeared.

I was surprised it happened so quickly since the first time I started the keto diet, it took over a month for any benefits to appear at all, and they were not as pronounced.

​Benefits ​I've Had From Being Fat Adapted

​These are all the benefits I have noticed after becoming fat adapted in my second week of ketosis. I believe it happened so quickly because I had already been in ketosis just a few weeks prior, so the switch happened faster than it would have if I'd not been in ketosis prior to starting in May.

You can see why I highly recommend trying the ketogenic way of eating. I praise God that I found Dr Myhill's book and decided to give it a good go. I had decided right from the start that if I did this, it would be for at least 6 months. You cannot play with dietary changes, you have to commit and give it your all, else you cannot be sure the results you're getting are legitimate.

Although I started in February, this is only my fourth month eating ​this way. I hope these benefits will continue as time goes by. I will stay on this way of eating for life even if this is the best I will get. There's no way I'm going back to carbs after seeing the dramatic side-effects I had.

​If you suffer from chronic illness; pain, inflammation, brain fog, fatigue, etc - I hope you will at least consider the ketogenic way of eating as a means to manage your symptoms, but also to help heal your body. This diet is healing, anti-inflammatory and so satisfying. It's absolutely worth a shot!

Getting Organised For The Year Ahead – Personal Update, Jan 2020
Exploring The Garden And Our First Family BBQ In Years
Creating A Retreat Away From My Own Bedroom
Health And Fitness: A Week Before I Fell Ill With Severe Chronic Illness
How Can I Be Physically Disabled And Not Depressed?

PEM and PENE in M.E. and CFS - PEM, which stands f

I wish people understood that M.E. is not only sev